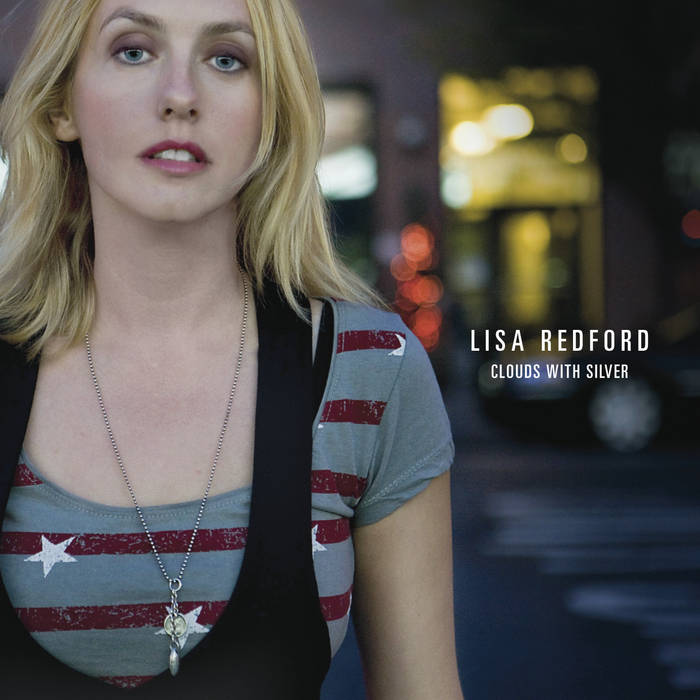 Lisa Redford's third studio album CLOUDS WITH SILVER is a glorious and heartfelt follow up to the critically acclaimed LOST AGAIN (2005).

Featuring eleven finely crafted self-written songs CLOUDS WITH SILVER takes Lisa’s blend of exquisitely melodic acoustic music to another level. With most tracks recorded live, the album is infused with a real intimacy showcasing Lisa’s soulful and powerful voice and heartfelt lyrics. From album opener, the upbeat radio friendly "Come Back Down", to the sweeping uplifting “Live Your Life”, through to the plaintive yearning ballads “The Boy Who…” and "Makes Your Heart Sing", the album is full of standout tracks. Other highlights include the dreamy "Call Me" and "NY Song" which also display her dynamic and evocative voice and immense gift for melodic hooks. The album closes with live tracks “New Years Day” and “Time to Grow”. Recorded live in the studio with just her voice and acoustic guitar, these two tracks totally capture the raw heartfelt emotion of Lisa's live performance.

Like Lisa’s previous albums, Clouds with Silver is available on iTunes and distributed through Proper Distribution who feel it is ‘a very strong and confident piece of work that deserves to be heard’. It earned even more glowing press reviews, airplay on BBC Radio 2 and other radio shows and been the most successful release to date.

Press for Clouds with Silver

'Excellent new album...a real step up in sound for Lisa, the quality and profile of the guests are guaranteed to raise her profile both here and the US, and this is an album that will bring her to an even wider audience.' Fish Records.

'a very strong and confident piece of work that deserves to be heard.' Proper Music Distribution

‘a sensational breeze of fresh air. The lyrical and vocal content of all 11 of Lisa’s self-penned songs, provide a longing for more and more accomplished singer-songwriters like herself to come out of the woodwork…a fantastic insight into a world of love, loss and changes’ Maverick Magazine ****

She has really developed as both a songwriter and performer has our Redford, the London-based songwriter who has surpassed all her previous work with this beautiful record...There is a warmth and welcoming vibe to Redford’s music that really is difficult to resist. Given that a lot of these songs seem to be about failed love or unquenchable longing, it’s an acute sense of melody and delivery that stop this becoming just another rummage around a broken heart. Musicianship is top class with strings being a welcome and unobtrusive addition. Her voice – sweet, sultry, sensational at times – becomes an old friend after a few plays and when at its best really does find a way of piercing the old emotional ducts. Bob Harris, the patron saint of female singer-songwriters, has Redford right up there at the top of the pile. It’s easy to see why with "Clouds With Silver" potentially being the record that will catapult her to new heights. Yeah, liked this one, mighty fine indeed.

This is classy and assured. Lisa is one to watch for sure.’
Properganda magazine

Clouds with Silver is Redford's best album so far. Her pure, pretty voice has developed a deeper resonance and character and her attractive melodies and thoughful lyrics have become more consistent and finer crafted.
Country Music People Magazine

tellingly it's the soaring yet intimate vocals of Redford that shine throughout…She adds smouldering depth to fine self-penned material such as 'NY Song', 'Live Your Life', 'The Boy Who...' and 'Time to Grow'. Her grasp of texture, mood and fearlessness in giving it her all, I suspect, comes with the realisation that she actually possesses a voice able to do her musical vision justice.’

'Lisa Redford is a breath of fresh air. Hers is a pure and quite lovely voice which delivers some sweet Americana-tinged songs from the heart, all done to tasteful acoustic arrangements including some nice fingerstyle guitar. '

'Lisa has already been described as, 'one of our finest singer/songwriters, by BBC Radio 2's Bob Harris and I would not argue with a Bob recommendation. This is melodic acoustic music of the finest quality; gentle, soulful and uplifting at the same time. The end result has been achieved by recording in New York City with some of the best in the business and with two albums behind her the apprenticeship is complete. She mixes delicate and melancholy with the upbeat with ease and should sit pretty either side of the pond!’
Classic Rock Society Magazine

’Redford has grown in both confidence and stature as both songwriter and singer for her best album to date.’ Fatea Magazine